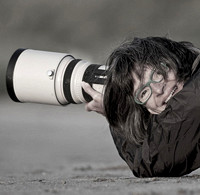 In the summer of 2016 my husband and I and our two cats packed up our belongings and moved to Orkney, a group of islands perched off the north east coast of Scotland on the 59th parallel, where the Atlantic Ocean meets the North Sea.  There are no regrets.

Orcadian life has always been shaped by wind and water - we have almost 600 miles of coastline - making this the perfect place from which to experience the fury of the elements, to connect with the primal forces that have carved out this island-home.  I am lured out by the worst of weathers, hunkered down on a cliff in a spot that could have been carved out just for me by all the raging tempests that have ever been, waiting for the point at which the triumvirate of wind, tide and rock combine to produce a moment of power so absolute that it is hard to comprehend.  Now remember to press the shutter button ...

Orkney is a land steeped in mythology and folk tales, from Fin Folk and selkies to giants and hogboons, and I get the strongest feeling that magic is alive and well here. To experience sea haar, or the simmer dim - the perpetual twilight of midsummer in the Northern Isles - is to enter an other-worldly realm, seemingly filled with enchantment and the supernatural.  But there is faerie magic here too, or so I found when I started to photograph the wild flowers of Orkney.

I give myself over to the idea that the combination of wind and flowers will have an exuberance, freedom within a form, like jazz to the classical.  I am looking for that in-between space, the unseen landscape that holds its secrets close.  For here, even though the image will be static, there will be flow and movement.  Some days I return empty-handed - the faeries will not tell - but other days I am granted a glimpse into their world, a privilege that is only given to those who want to see.

I was awarded a Fellowship by the Royal Photographic Society in 2012 and have exhibited extensively in the UK and also in Florida.  I have work hanging in homes around the world.

If you are interested in purchasing a print please contact either the Paragon gallery in Cheltenham www.paragongallery.co.uk or The Burford Garden Company www.burford.co.uk. Alternatively you can get in touch with me directly at [email protected] or via the 'contact me' page.  I am able to ship un-mounted, unframed prints at the gallery prices.